New technologies have given governments an unprecedented means to access personal information. In order to ensure that all people can seek information and express themselves freely, there must be reasonable checks and balances on governments’ ability to access, collect, and store individuals’ data. Both security and freedom can be protected, but only through balanced laws and policies that uphold human rights. Surveillance happens at many levels: It can be eavesdropping programmes of foreign and local governments, it can be commercial corporations on a global scope, it can be more or less institutionalised and it has many different aspects, reaching from self-censorship to pleasure, from activism to fatalism. The question, though, is not so much if we mind but rather how and when we mind.

The revelation of NSA documents through Edward Snowden in 2013 had brought otherwise secret intelligence activities into the light of global attention. It has been shocking for many to realise that mass surveillance technologies are targeting civilian communication, including social media platforms. In fact, the era of mass communication has become the era of mass surveillance and hence, the question of personal freedom of expression has gained a technological dimension. The revelations have also shown that national security agencies have strong ties with giant tech companies which are willingly cooperating in giving access to information, proving that even civilians have “nowhere to hide” anymore.

These were the topics discussed during a seminar this semester at the department of STS with a visiting professor Jutta Weber, who is a science & technology studies scholar and professor for media sociology at the University of Paderborn. She recently has been working on technologies of surveillance and control, drone warfare and the politics of databases from an STS perspective. Within the seminar, we organised a panel discussion to touch some of the issues regarding surveillance and privacy rights, which was held on 3rd May 2016, with journalist Sarah Kriesche who is working mainly for the Austrian public broadcasting station OE1. Her current interests revolve around the history of security agencies and surveillance; and activist Andreas Demmelbauer who is affiliated with Metalab as well as a member of the Austrian activist groups AKVorrat and Initiative für Netzfreiheit, both focusing on the protection of civil rights in the digital age. By including professionals working on the interface of technology, communication and society, we arrived at a more nuanced understanding of the role of surveillance technologies in everyday life.

During the discussion we saw that also our guests use all the common communication channels – phone, email, instant messaging – but they use them more cautiously.  A journalist has to protect her/his sources, which is more than a private concern. However, at this point no legal framework or any national or international organisation has the ability to guard citizens’ privacy rights. For example, there is clear evidence about NSA activities in Austria and Vienna, yet, it is unknown if the Austrian government has taken action and on which legal basis foreign surveillance activities can be justified.

Yet surveillance also happens for commercial reasons. Private companies, the popular tech giants, are under criticism of abusing their customers’ trust when supposedly private behaviour, like seeking or sharing information, becomes accessible. However, it seems debates and concerns are slowly vanishing, probably because the perceived advantages and gained pleasures of using the various services prevail. Computer-mediated communication has become more than a mere personal preference. It has become such a widespread practice that non-participation is no longer an option for the individual. Furthermore, the mechanisms of social media are designed to produce social recognition which answers a basic human need. 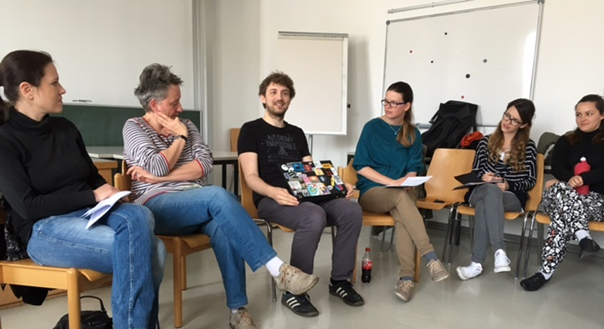 Working for a legal framework that can both secure the advantages of online communication, while protecting civil rights, is a motivation for activists like Andreas Demmelbauer. Local initiatives such as AKVorrat do not only share technical and legal expertise on data protection, but also actively engage political actors to influence and improve policy-making. On the other hand, as Sarah Kriesche pointed out, offering secure communication and data protection has become not only a successful business model for start-ups, but also a marketing strategy for some of the major providers.

To sum up, there were many relevant topics in the debate that would be worth investigating through STS approaches, as the driving forces of technological development are deeply intertwined with societal actors and power relations.

Pouya Sepehr, Maresa Barbara Wolkenstein, Helene Sorgner and Marilen Hennebach are students of the Master programme ‘Science-Society-Technology’ at the University of Vienna.