Together with the natural science partners in our project Valuing, Being, and Knowing in Research Practices , we have recently published a short article in the Science & Society section of the EMBO journal. Our project partners work in the areas of plant breeding, soil-root interactions, and soil microbial ecology, and are located at the BOKU and the University of Vienna. The piece we wrote and published together deals with, and problematizes, dominant notions of innovativeness in research practices. At least for one of us – Ruth – this was the first experience of co-authoring an article as an STS scholar together with researchers from the life sciences. Not only for one of us, however, the process of writing this article, as well as the longer path of getting there was a fully pleasant experience that came along with much mutual learning. How, then, did we arrive at writing this piece?

Interesting enough, the very focus of inquiring into notions of innovation in science was not one that was integral to our research project from the beginning, but it developed in and through the conversations with our interview partners (and now co-authors). Already in September 2019, we began to talk to our project partners from the plant and soil sciences about the various aspects that influence and matter to them when taking decisions in their work (Fochler et al. 2016). In particular, we were concerned with how researchers articulate the relevance of their work to social-environmental problems in their everyday practices and decisions. As we quickly realized, concerns about the social-environmental relevance are often not easy to make sense of for the researchers in their everyday work, and they often need to be negotiated alongside various other ways in which research is valued. One of which, as was often emphasized in these initial interviews, is the innovativeness of research.

Our project partners often pointed to an increasingly perceived need to demonstrate and emphasize the innovativeness of their work when, for example, writing publications or funding applications. Yet, we then asked ourselves, what exactly is it that comes to count as innovative in such contexts? How exactly do researchers (feel they have to) frame their work when arguing for its innovativeness? And, importantly, how does this shape their research practices, and how do they potentially adapt their work to such perceived demands for ‘being innovative’? In order to delve into these questions more deeply, we decided to conduct focus groups with our three collaborating research groups. These discussions – partly in person, partly online for pandemic reasons, but no less lively – were extremely insightful for us, and triggered many reflections on the side of our participants as well.

In a nutshell, our participants described that innovativeness in the current research system often seems to be seen as making ‘groundbreaking’ and risky steps in novel and unexplored areas, while research practices that build on continuity and the further exploration of previous findings often seem to be seen as less original. Ruth then described and analyzed these dynamics in much more depth for the first paper of her dissertation (see Falkenberg 2021). 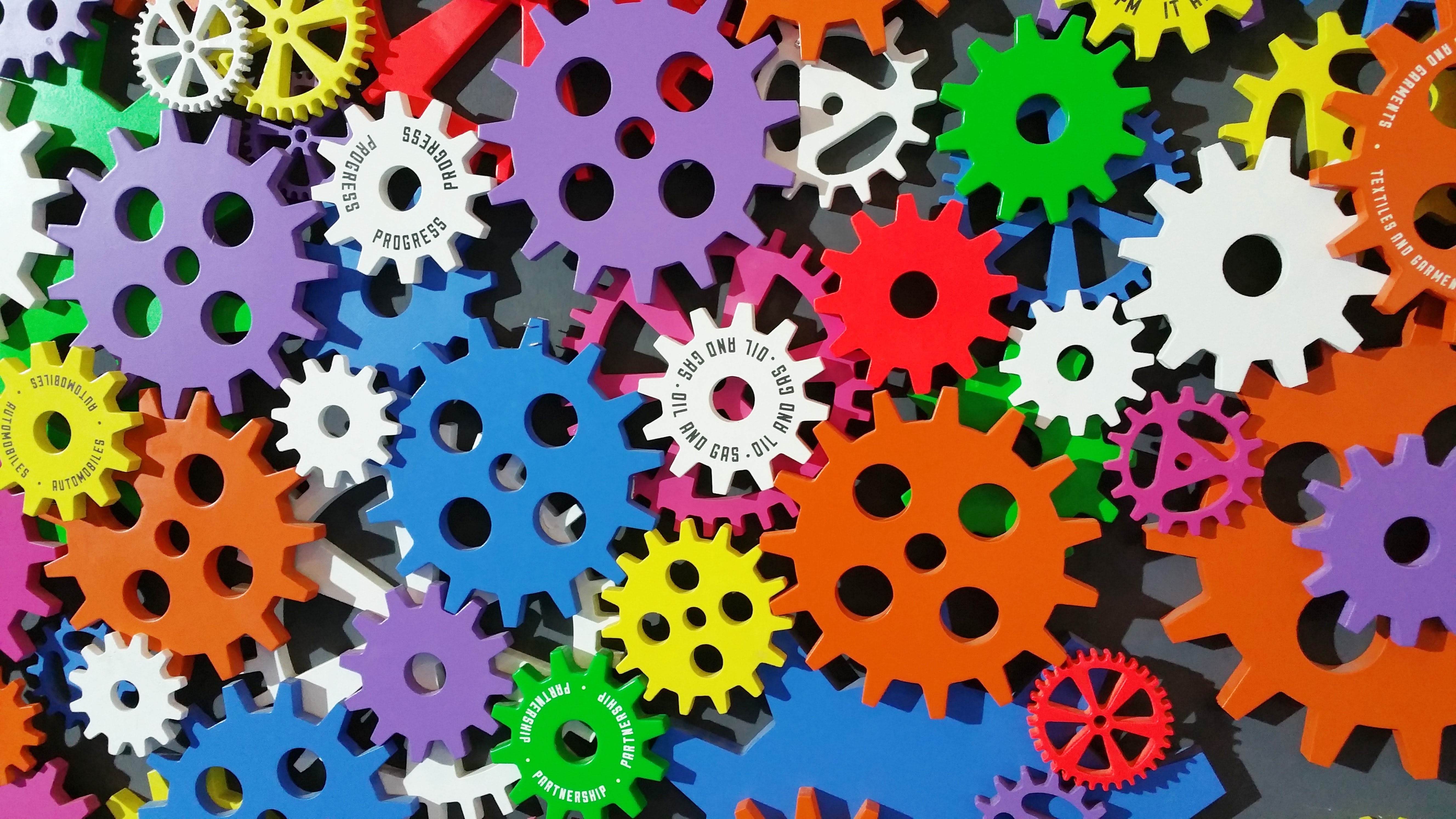 Pictured: Innovation in science hardly comes about in single breakthrough projects. In our discussions it was often suggested that scientific innovation may rather be imagined as a myriad of small cogwheels tying into each other.

Yet, we also felt the wish to bring these insights to a different audience than that of our own field, and to communicate them in a more accessible form in a journal that is also read by life science researchers. This sparked this idea of writing not only for natural scientists but also with (some of) the researchers we collaborate with and have talked to in the first place. This idea immediately resonated with our project partners, to whom the dynamics around innovativeness in science that we have collectively explored are of no less concern than to us.

The three of us then drafted a first version of the current article. The subsequent feedback process with our project partners sometimes took a bit longer, partly because of Covid-related time scarcities on different sites, but also because some of our colleagues from the crop and soil sciences imagined it to be a difficult task to comment on a social science text. Yet, after a somewhat slow start, we received very valuable feedback and inputs from our project partners, and they particularly pointed us toward the need to refine and partly change our language when writing for a non-STS-audience.

Similarly, the step of exploring which journal would be suitable for publishing such a piece took a bit longer than usual: rather than choosing from a list of well-known journals in our own discipline, we needed to research and evaluate different possible options from scratch. After exploring and discussing different potential outlets, we decided to opt for a publication in the EMBO journal, which is featuring a special section on issues relating to ‘Science and Society’. This seemed a valuable opportunity for us to publish in an outlet that is prominent within the life sciences but that also provides a dedicated platform for discussions concerning research governance and questions of how research is valued and evaluated. After sending an initially much shorter version of the article to the EMBO journal, the editors encouraged us to further elaborate and exemplify the argument and extend the article. At first being rather surprised by this demand, as we are usually used to shortening our arguments wherever possible, we happily took this suggestion on board. The process of revisions was accompanied by repeated feedback rounds with our project partners, who gave valuable input at different stages.

With our co-authors, as well as with the editors, we soon agreed on a version we were all content with, which was published quite swiftly. Overall, the process of co-authoring this piece was very enjoyable for all of us, and we certainly learned a good bit about what to pay attention to when writing for, and with, such a different audience than usual. Most importantly, we experienced that it can take some time to establish a basis on which interdisciplinary publishing becomes possible (see also Brown et al. 2015), but that it can be a most rewarding experience to collectively contribute to discussions in such a way. 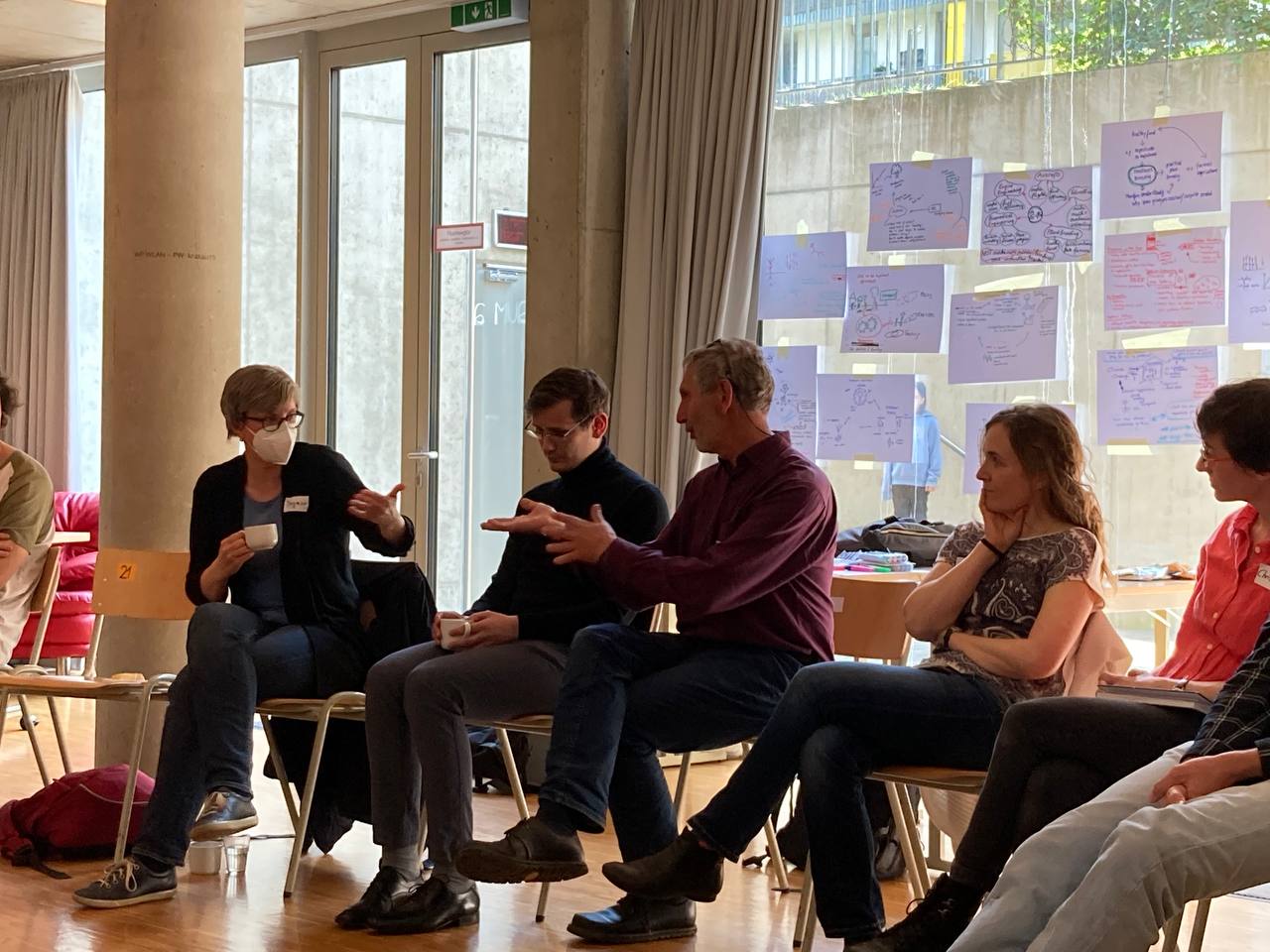 Pictured: Lively discussions during one of our project workshops

Ruth Falkenberg is a doctoral candidate at the Research Platform for Responsible Research and Innovation in Academic Practice. In her work she is concerned with the intertwinements between (e)valuation of research and epistemic developments, focusing specifically on innovativeness and relevance as increasingly important evaluative registers. In doing so, she pursues a broader interest in neoliberal governance in academia, cultures of knowledge production, and research for social-ecological transformation.

Lisa Sigl is a postdoctoral researcher at the Research Platform Responsible Research and Innovation in Academic Practice at the University of Vienna. She is interested in changing work cultures in science and the governance of research, with a focus on societal and environmental relevance of research. Further, she is interested in what kinds of conditions support inter- and transdisciplinary work and develops methods and tools to facilitate and manage inter- and transdisciplinary exchange and collaboration.